“We believe that some emotions are beyond words. Arts can express them. It can acknowledge life and relieve our sorrow for the departed”

A funeral is the end of life as a journey. This notion, however, kickstarted a series of creative works by a group of young artists. In 2017, the performance Searching for Stillness was first created. It then evolved into a 47-minute short film as Searching for Stillness (Re-run) in 2020 due to the pandemic. The creators participated in the Arts Go Digital Platform Scheme under the Hong Kong Arts Development Council and developed this funeral-themed art website, with an original song composed by local musician Roger Chung. A series of music workshops were also organised among this plethora of artistic experiments.

“Searching for Stillness was originally a theatre work created at the end of 2017,” recalled Tang Cheuk-man, Penelope who created, coordinated and produced this project. She added, “At the time, we were only a group of like-minded friends who wanted to use different media to showcase funeral rituals in a theatre space. We wanted to explore and unleash its healing and expressive qualities”

Searching for Stillness is a matter of life and death. In Chinese society, death is a taboo. The creative team would like to address the negative emotions with a non-verbal expression. It involves a range of funerary rituals coupled with a mixture of art forms.
“Searching for Stillness started from a certain curiosity. A screenwriter friend and I wondered why rituals are rituals. We had seen and been to weddings of various styles. But for funerals rituals, some people insist on doing this, while others insist on doing that. We all wondered whether we could have our own ideas instead of just following the tradition? At some point, we wanted to express it with art and experience it with the audience,” Tang said. She graduated from the Hong Kong Baptist University in Visual Arts. Besides arts administration, she is currently involved in music creation and education work. She has many friends from the arts sector. In the early stage of this project, she appropriated a short film made by the screenwriter in the team. It tells the story of a young man returning to his funeral after suicide.

After the performance Searching for Stillness premiered in 2017, the team intended to re-run it in 2020, but the pandemic changed their course. After some thoughts, the team decided to shoot a short film instead. They applied for a grant from the Hong Kong Arts Development Council to produce a video version of Searching for Stillness (Re-run). The film has been completed and released (https://bit.ly/3vkxH2M). Searching for Stillness is not merely a theatre work. Through Arts Go Digital Platform Scheme, they built a funeral-themed art website. They also composed the song My Life, My Song (我的生命，我的歌) and held music workshops with the elderly. 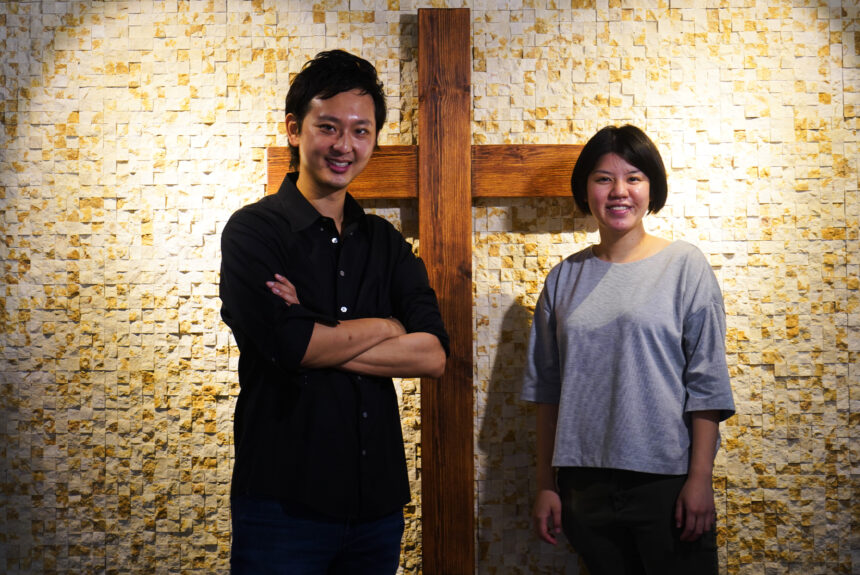 Searching for Stillness, Funeral-themed Experience Website (https://searchingforstillness.com/) allows us to personalise our own funeral online ─ including rituals such as cremation or coffin burial, our mourning portrait, flowers, farewell songs, funeral urn, and eulogy. These are divided into six parts on the website. Last rites and death are issues that are hard to address. The website invites us to face them directly, and each part happens to correspond to one art form. “Each of the six parts of the website is linked to one art category. For example, the farewell song to music, mourning portrait to photography or painting,” explained Tang.

It has been a few years since Searching for Stillness was conceived. Tang explained why life and death are still on her mind, “I don’t really use the term ‘education on life and death’. I’m just trying to express what is hard to convey. I do music mostly. And I care about art’s therapeutic quality.”

Tang and her team are not really focused on the funeral itself, but on the power of art. Tang said that Searching for Stillness helps us let things out through non-verbally art forms being applied in ceremonies. “Sometimes, we can feel what is tacit. We are not trying to replace the existing rituals. We aim to apply different artistic elements in the funeral and offer some new approaches,” she said. “Does art help the deceased or the loved ones emotionally?” Tang wants to find out through the website.

At the beginning, she thought of doing it in the form of a psychological test, so that the audience would realise there are choices for a funeral. “But after some thought, since each part leads to new services or practices, we combined the psychological test with the introduction of the funeral rituals. The process that you see now is a traditional funeral. This introduction will allow the audience to go for different choices. Finally a projection of the funeral will be generated for your reference,” she said.

There lies a hidden message, that everyone can also review their own life, “The funeral will be interpreted as a life review. You can put some of your own thoughts in your ‘last party’, however crazy they are,” she added. 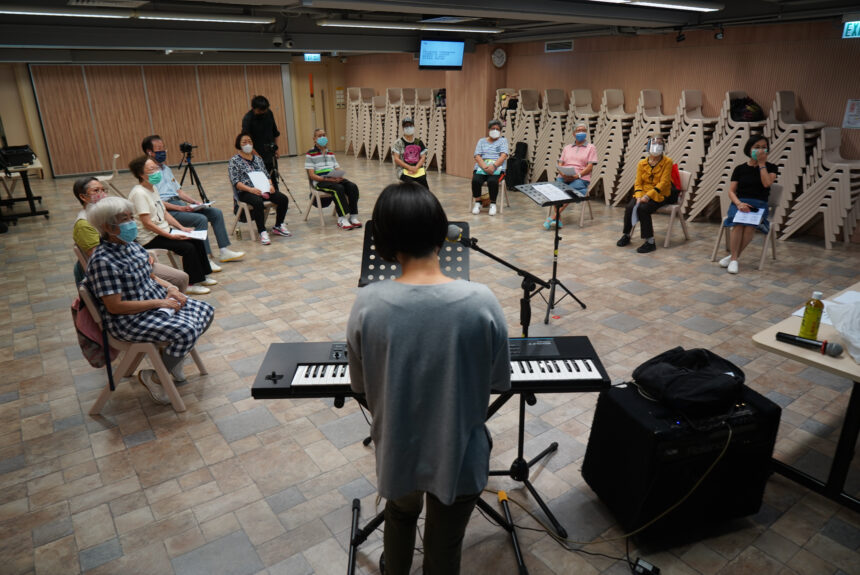 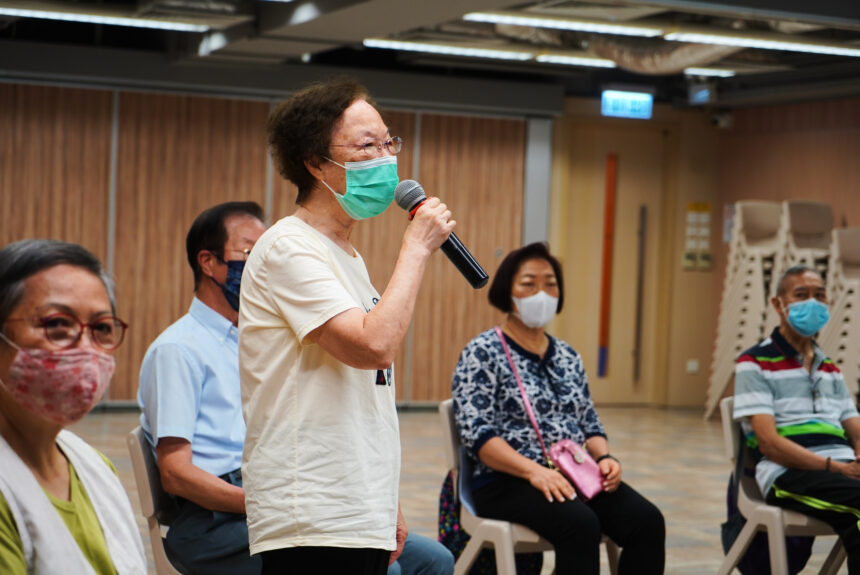 Well performed by the elderly, after some practice 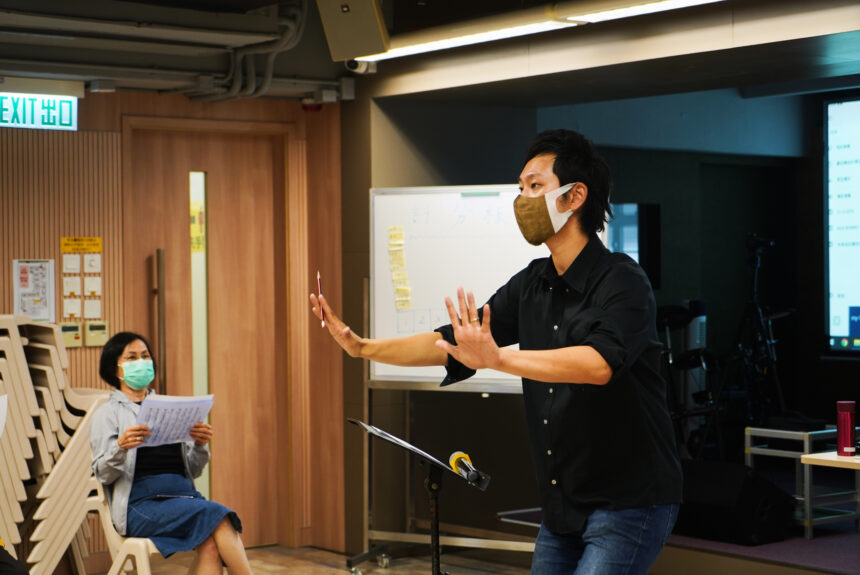 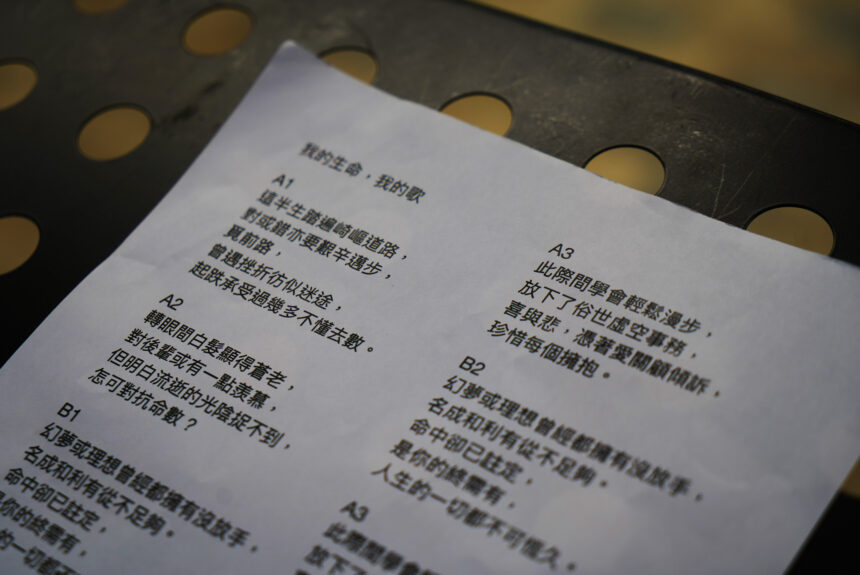 Original song: My Life, My Song 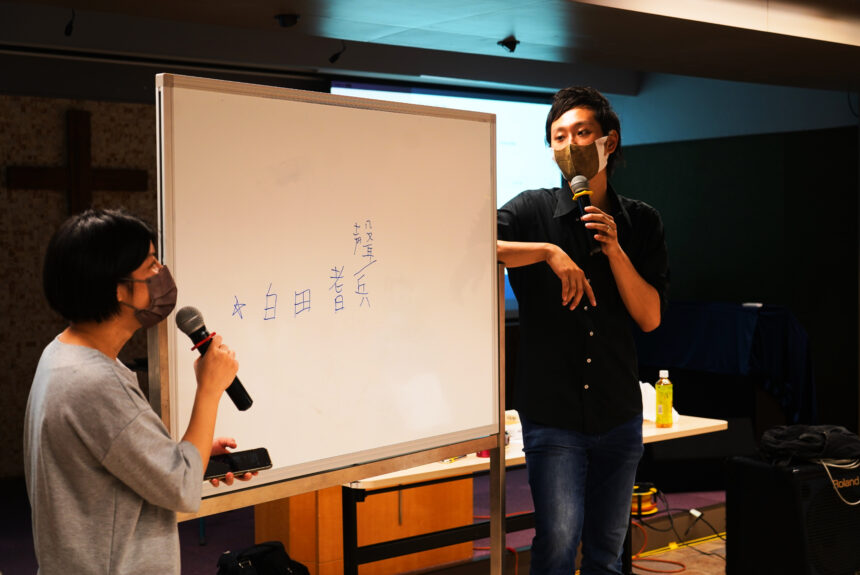 It was a Saturday in May. We could hear some people singing in a church in Pak Tin, Shek Kip Mei. It was a music rehearsal. In fact, other than the video version and the website, the musical part in Searching for Stillness is essential as well where Roger Chung composed the original song and rehearsal was held.

“In the blink of an eye, my grey strands only make me sigh. I envy my youthful predecessors. What’s bygone is bygone, hence this song”. These are the lyrics of My Life, My Song.

May these lines sound philosophical, they were actually inspired by many stories from the elderly. Chung reminisced with these silver-haired elderly before he started writing this song. After My Life, My Song was written, five workshops were organised in which he rehearsed this song with the elderly. It will be released after an eventual recording in the studio. “Roger and I knew each other. He had shown interest, so I asked him to join this project. It was quick for him to collect the elderly’s ideas. And he wrote the song,” said Tang.

It was an in-depth data collection, she described, “In the beginning, we went to hear their thoughts. Everyone talked about life philosophy and attitude, and a lot of life experience, but at this late stage of life, no one was stubborn anymore,” said Tang. “That’s why we try to look forward to these life events to affirm their contributions.” She said that the reason why she wanted to have this original song written was that different funeral ceremonies acknowledge the lives of the deceased. As artists who can make music, they want to offer music to the elderly.

On the day of the interview, in addition to usual rehearsals, Tang and Chung named the chorus together with the elderly members as “Pak Tin Senior Chorus”. After an hour and a half of practice, the chorus has greatly improved, may it be in pitch or in tempo. Tang suggested one more practice before venturing into the recording studio. The song received raving reviews from their peers. So they are planning to upload the song to various streaming music platforms aside from online video platforms.

“We believe that some emotions are beyond words. Arts can express them. It can acknowledge life and relieve our sorrow for the departed,” she said.