The project aims to awaken the public’s awareness of the north-eastern border communities of Hong Kong through music depicting its indigenous culture. Six composers are invited to create music which narrates the history, religion and mixed background inhabitants from the area. Audience can immerse themselves in the ambience via the 360-degree panoramic images of the landscape and buildings. Simultaneous sign language interpretation will be available for hearing impaired viewers.

Sze Ka-yan founded “Fragrant Village” in 2016, a local non-profit music organisation aims to use music as a tool to connect communities and environment, pairing up musicians of different genres with communities in dynamic music events. Sze curated and published Fragrant Village, a collaborative album created by independent Hong Kong musicians and inhabitants from three districts of north-eastern New Territories. In 2019, Sze curated “I We You They He She It” Village School Anthems Exhibition and The First Fragrant Village Music Festival: ALARM.

John Choy is a freelance photographer. From 1989 to 2001, he has worked for several domestic newspapers and magazines as well as the Information Service Department of the Government. Choy is especially gifted in capturing the hidden landscapes of the city and exploring innovative ways of expressing images. His album, Lower Ngau Tau Kok Estate, was published in 2010.

Journey to the Northeastern Border via Sounds and Sights

This project invites six musicians to create original works for various historic and significant sites in the northeastern territories of Hong Kong. Through these on-site performances, supplemented with simultaneous sign interpretation, the present and future of the city into perspective. 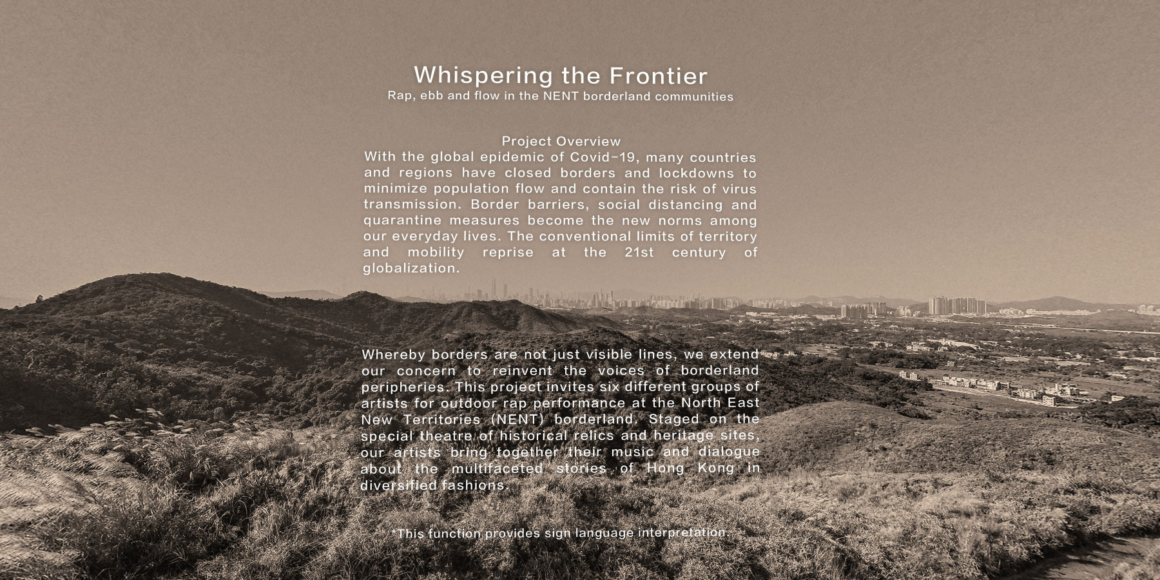 When the storyteller “Little Uncle Hung” (Yuen Chi-hung) meets the historian Dr. Wong King-chung at Cowhouse hill, together they trace the borderline in between skyscrapers and greeneries. Such virtual-and-real shuttle over the mysterious border is accompanied with music by Lau Chi-bun.

Located at the northernmost territory, the ridges of Wa Shan lies parallel to the borderline and offers an obstructed view over the transborder plain. In the past, the colonial armed force built a very narrow, one-way path for the military vehicles to-and-fro Man Kam To border checkpoint and Ping Che District. Nearby is the San Wai Barrack and San Wai/ ai Ling Firing Range, which suggests the strategic importance of the place.

Wa Shan is also known as Cowhouse Hill for the neighbouring villagers where the “Yuen-Yuen Cowhouse” once produced fresh milk prior to the 1980s.

Pak Fu Shan is located at the frontier with commanding height and thus strategic value. A fort was built at the hilltop during the Japanese occupation 80 years ago. The fort has narrow spaces just enough for 4 to 5 persons and it is oriented toward the Shenzhen side. The villagers recalled being forced by the Japanese soldiers to work on the construction of the fort.

Low B and Ah Kwai infuse the sounds of folk music with stories of local livelihood in Hong Kong. Their works incorporate the yearning of kids living in temporary housing estates and the nostalgia of retired workers. The folk songs serve as a narrative of the various changes since the NENT Development Plan in 2013.

“Timber connects human beings to nature. The trees are always calmly on our back. They are so honest and humble. We are so grateful.” – Kuen Gor, current owner of Chi Kee

Chi Kee is one of the few existing sawmills in Hong Kong. Established in North Point since 1947, Chi Kee stood firmly against challenges at times. In 1983, the sawmill moved to the current address at Kwu Tung (Ma Tso Lung) in Sheung Shui. As importation policy hit the local industry in 1990s, Chi Kee shifted to reinvent sources of wood materials recycled from utility poles and piers and remains in business until now. However, the fate of Chi Kee is now threatened by the North East New Territories (NENT) New Development Plan and could be forced to move again.

Mouse FX, a local Reggae music producer-cum-singer, will act as the “sneaky mouse” and sing about the secret journey of the Sneaky Pass in Canto-Reggae style.

The Sneaky Pass was a mini path adjacent to the main Man Kam To Road along the former Frontier Closed Area boundary in the NENT. The muddy path was used as a backdoor bypass the official checkpoint after dark, especially for those without the Closed Area Permit.

Local villager Long-jai, MC Yan and percussionist Vicky Shin will perform together in this abandoned settlement. The ensemble will start with a soul-awakening with signing bowl, followed by a Hip-Hop showcase telling the border story.

Moro House (Mor Lor Lau) does not appear on Google Map or any other official records. Located just next to the borderline, the fort was formerly a colonial guard house stationed by the Indian soldiers back in 1930s. Local villagers thus called it Mor Lor Lau and its nearby settlement Mor Lor Lau Village. The fort had since been abandoned and is now concealed within the woodland with no heritage status but loads of myth. On the contrary, the similar-aged Ta Kwu Ling Police Station in its vicinity has been ranked as a Grade III Historical Building.

In a century-old Hakka watchtower (diaolou), singer-songwriter Wilson Tsang and versatile composer Jason Kong will engage in an improvised music dialogue on vocal/piano and cello respectively.

Liantang / Heung Yuen Wai is the seventh land border-crossing point between Hong Kong and Shenzhen. Adjacent to Pak Fu Shan and situated between Man Kam To and Sha Tau Kok, the area is the northernmost part of Hong Kong. Its construction began in 2013 and is eventually completed in 2020. Heung Yuen Wai is the village on Hong Kong side whereas Liantang is on the other side in Shenzhen. It is said that people of the two areas often fight against each other in competing for resources in the past.