“1a space organised online art workshops to reconnect with people and mend the hearts; cross-disciplinary artist and curator Wong Chi-yung called for the attention from the arts industry and the public to the mental health of cultural practitioners.”

As COVID-19 pandemic has plagued the world for almost two years, the world has changed and so has Hong Kong. Social distancing measures such as bans on group gatherings continue. Lockdown, quarantine and various restrictions confine us to this cramped city. Prolonged loneliness generates negative energy and pressure will grow if there is no way out nor good mental life. In this interview series, both taking part in the “Arts Go Digital Platform Scheme”, 1a space organised online art workshops to reconnect with people and mend the hearts; cross-disciplinary artist and curator Wong Chi-yung called for the attention from the arts industry and the public to the mental health of cultural practitioners through feature articles, mobile virtual experiential application, and online seminars.

1a space and the Academy of Visual Arts of Hong Kong Baptist University jointly commissioned five artists and arts educators to organise online arts workshops to enhance resilience and toughness of participants, which could be found on the website “Letting Go Carry On”.

Co-curator of the project Eugenia Law was well aware of how greatly arts practitioners were affected when physical creations and performances were put to halt under the pandemic. In this “time of strangeness” to the arts field, five artists with teaching experience were invited to hold online workshops to guide participants in arts creations and disperse the gloomy moods caused by the pandemic.

Eugenia explained that the purpose of the workshops was to explore connections with the outside world and interact with people in the community. Our society had recently accumulated a lot of negative emotions for which arts creations might provide an outlet. While holding online arts workshops was a new attempt, both Eugenia and the artists were not sure about the reactions of the audience in the beginning, but to their pleasant surprise the reactions turned out to be very good. “Thank God. Some participants have experiences in creating artworks, while some seldom join arts activities. Many participants were new to arts creation and some were over 60 or 70 years old,” Eugenia said. 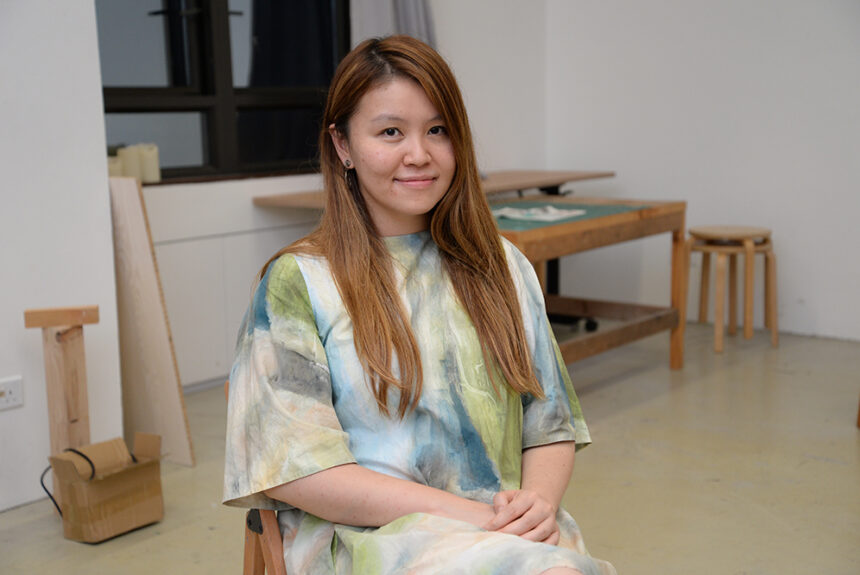 Eugenia Law thinks that participants feel more comfortable in telling others how they feel in online workshops rather than face-to-face workshops. (Photo by Wan Sui-lun)

The five artists create with different medium and methods but their works have a common style: restrained and quiet. “Going deeper prolongs the time of thinking. For example, Debe Sham used water as the medium which has multiple meanings. Water could be delicate or strong. Participants wore ornaments made of ice and left home. When the ornaments melted, it signified the disintegration of memory,” Eugenia said. Implicit expressions made people introspect, reflect on their emotions, and heal their minds.

Were these therapeutic workshops effective? Eugenia pointed out that the curative effect of arts was difficult to quantify but at least participants’ willingness to share helped themselves ease their emotions. One participant was particularly frustrated by the social events in 2019 and the pandemic. He used pictures to record the changes in the streets of Hong Kong, visualising his emotions and relieving himself of the burden. Originally quiet participants eventually became willing to share after several workshops. 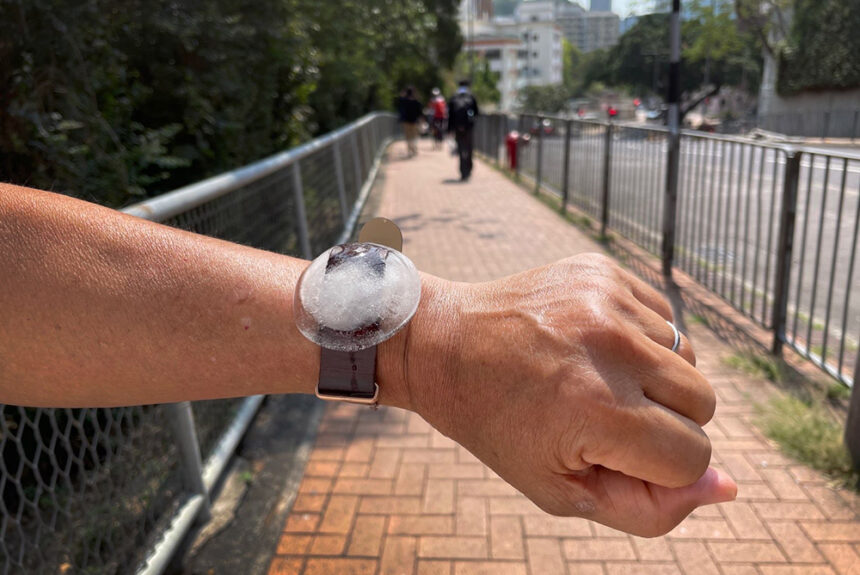 Five workshops came with different themes. In Debe Sham’s workshop, participants were led to make artworks with ice. When the artworks melted, they symbolised the disintegration of memory. (Photo provided by the interviewee)

What were the limitations of turning physical workshops online? Eugenia explained that it was not possible to directly compare physical and online workshops, but online workshops did have unexpected advantages. Participants were more willing to express themselves when being in a familiar and comfortable environment at home. However, they would be more easily distracted in online workshops, so the artists needed to put extra effort in maintaining their engagement.

Another bonus for this community experimental project was that regular workshops had connected a group of participants. “We have WhatsApp groups to continue our long-term relationship with the participants,” Eugenia said, hoping the project would be sustainable and there would be follow-ups in future. 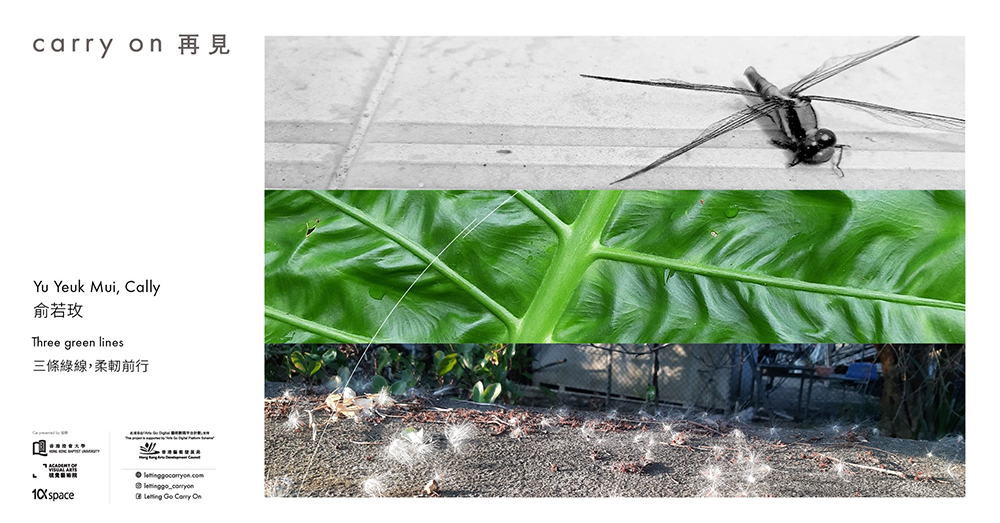 Writer Cally Yu led the online workshop “Three Green Lines, Let’s Carry On With Resilience” to help participants to rediscover their surroundings. In a workshop, she asked participants to track some plants. By observing the growth of the plants, they became very happy and brought power to themselves. “I would explore deeper on the relationship between plants and their minds and the things that moved them to change their emotions,” Cally said.

In the workshops, some depressed youth shared their relationship with their fathers. Social workers talked about their work pressure. The workshop provided no treatment, but through rediscovering life, negative emotions could be alleviated. 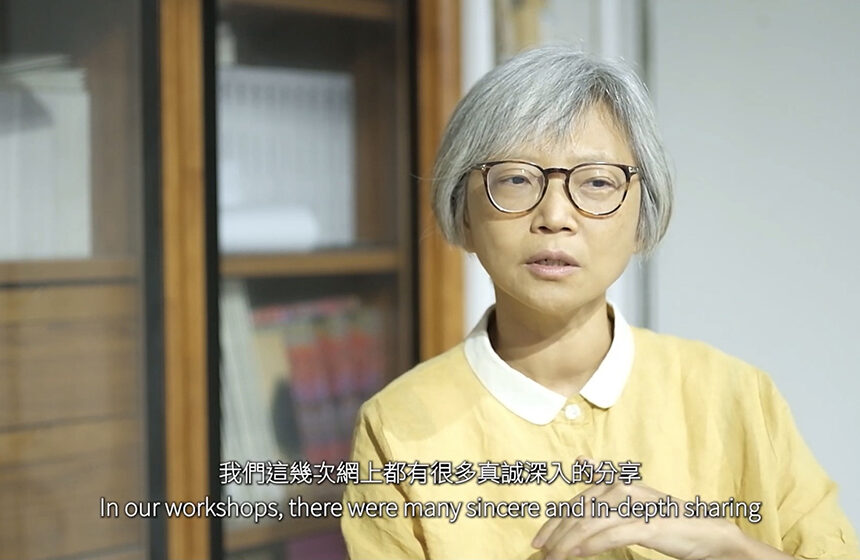 Cally Yu believes that creating arts can help participants express themselves. (Screenshot of the project video)

The pandemic caused psychological pressure on the public. Cross-disciplinary artist and curator Wong Chi-yung also observed that arts practitioners had long been facing serious mental health hazards but not been given due attention. Consisting of three parts namely “Artistic Brain Friends Talk”, “To See A World in a Grain of Sand．VR Edition” and “Brain & Friends Seminar”, his “Cross-Disciplinary Series: Exploring Arts & Minds” aimed to serve as a starting point to bring out more discussion on the issues. He was glad that the three parts had achieved their purposes.

For six months he had worked with writer and photographer Yvonne Chan and drama therapist Li Si-yeung to conduct interviews with arts practitioners, educators, arts administrators and clinical psychologists on their views about mental health. He admitted that the promotion of mental health in the arts sector could not be achieved overnight. Taking issues like sexual harassment and domestic violence as reference, it required a group of people to promote new thinking in order to change the public views. Hence, the three parts of the project used three completely different formats targeting different groups of people namely feature articles, artwork in virtual form and seminars, hoping to draw as many people as possible. He considered this strategy successful as he recorded over 6,000 views of the project. “Most people might not have read all three parts. Some liked feature articles and some liked seminars. Those who had joined the seminars probably would read the articles afterwards,” Wong Chi-yung said. 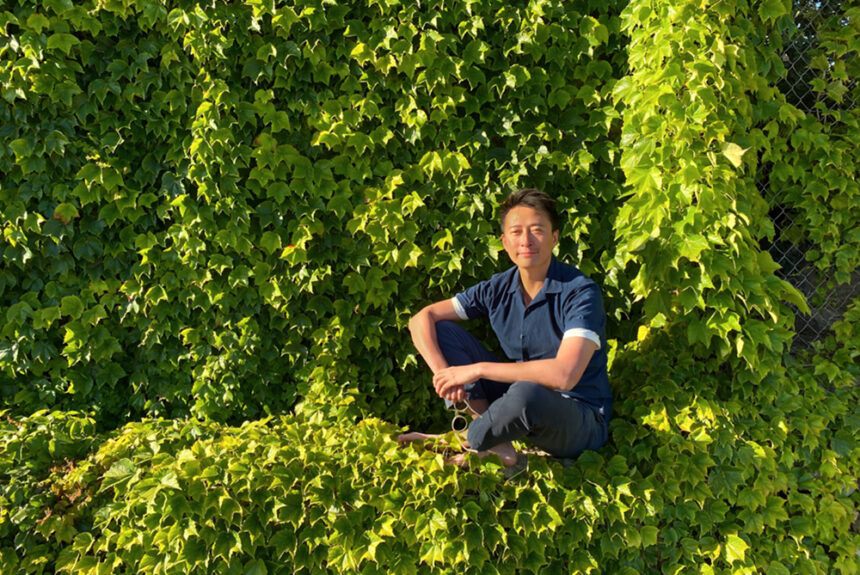 Wong Chi-yung thinks that the project is the first step to make the public and arts practitioners to be aware of mental health issues in the arts sector. (Screenshot of the project website)

The project had interviewed over 30 people and many of them did not understand mental health at the beginning. Some even regarded it as a mental illness. After interviews and explanations, they had enhanced their understanding and were even able to identify possible causes of mental pressure in the arts sector and their respective solutions. Wong Chi-yung concluded that these interviews served two functions: examining the interviewees’ views on mental health, and prompting them to think about the issue and probably making them one of the promoters of mental health in future.

Besides interviews and seminars, this project also included a mobile app “To See A World in a Grain of Sand．VR Edition”. Wong Chi-yung worked with local multimedia artist Thomas Ip to adapt his large-scale experiential installation with the same title into a mobile app and integrated Virtual Reality (VR) technology to create a visual and auditory mindfulness experience for participants and help them enter into a space of contemplation. 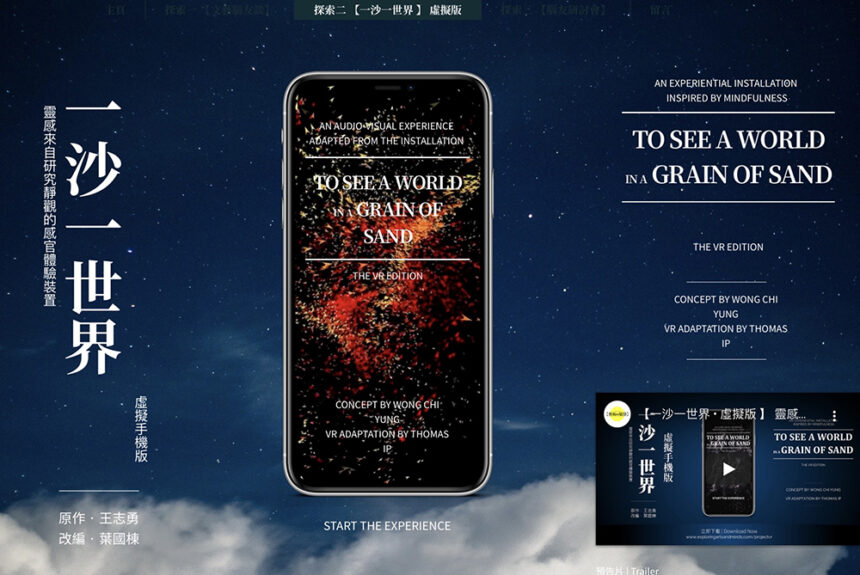 Wong Chi-yung’s project consists of three parts. People who are interested in mindfulness can download the mobile app “To See A World in a Grain of Sand．VR Edition” for practice. (Screenshot of the project website)

Most arts practitioners are freelancers without job security, and do not know how to upkeep their mental wellness. Their self-demanding characters, complicated funding application procedures and many others are also the sources of pressure. Wong Chi-yung suggested including mental health into the health education curriculum. The interviewees also put forward many suggestions to establish a support network, such as strengthening arts practitioners’ understanding in emotional health, developing mentorship programmes to impart how to deal with stress, and promoting arts creations on related topics.

Wong Chi-yung knew that this cross-disciplinary project was only the first step and the current situation would not be changed in a short time. Nevertheless, if one person could influence three people, and three people could make it nine. In the long run, such discussions among individuals would turn into an ecology that attached importance to mental health, and academics would study the mental health situations of the arts sector. And with research findings, the government would initiate relevant policies.

Would this be just a rosy vision of an artist? After the project “Exploring Arts & Minds” was launched, Wong Chi-yung was sponsored to work on another project as an extension which would include arts creations and seminars. Hence, the project did have some effects. Moreover, audiences with no arts background participating in the seminars would deepen the public’s understanding of the issue of mental health in the arts sector.

Why was investigation into the issue of mental health of the arts sector important? Wong Chi-yung said that many artists did not know how to deal with mental or living pressure so they shift their career to arts administration or commercial arts in their thirties, thus we can “find many little flowers but only a few old trees” in the arts sector. If every artist took good care of his/her mental health, the entire arts ecology would develop healthily.

Arts should provide people an outlet to express their emotions, but unfortunately it becomes a source of stress to artists. Every arts practitioner who wants to have an enduring career must have a pair of healing hands that also bring comfort to his/herself. 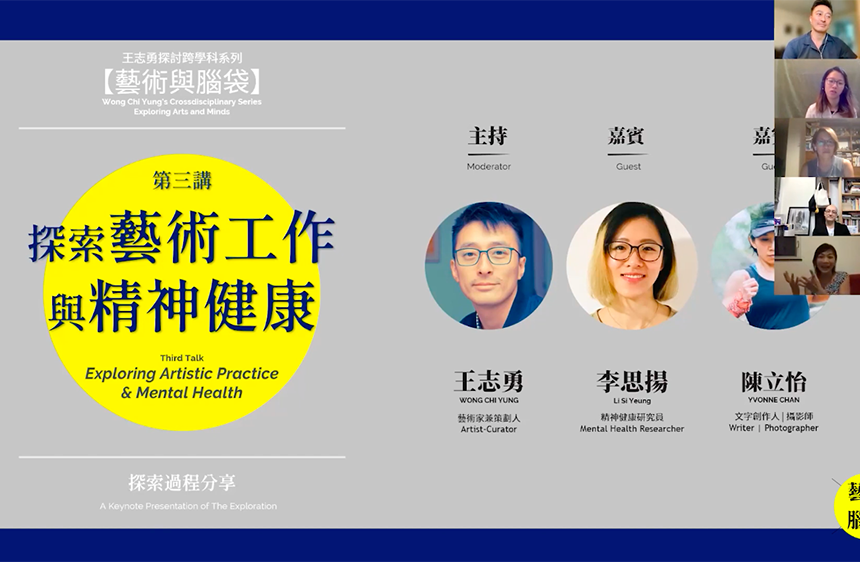