“the enthusiasm of theatre practitioners was not deterred and some directors tried to break through geographical restrictions and present their works in unusual ways on online platforms.”

Last year, restrictions and preventive measures under the COVID-19 pandemic caused temporary closure of theatres for more than 100 days, thus adversely affecting the livelihood of theatre practitioners. Performances were delayed indefinitely and even drama classes were cancelled when primary and secondary schools changed to online teaching. Yet, the enthusiasm of theatre practitioners was not deterred and some directors tried to break through geographical restrictions and present their works in unusual ways via online platforms. In this interview series, two theatre practitioners share how they have brought a distinctive viewing experience to the audience.

The story unfolded when KOL Joyce opened a Facebook group and a self-abased girl Windy joined. The two met on social media. Feeling neglected by her own family, Windy made Joyce her model, and eventually wanted to replace Joyce, triggering off a series of illusory kidnaps.

The audiences were required to take a great part in the play: adding characters as Facebook friends, learning about the character’s family background and the personalities of the family members and friends in order to deduce the story plot. They could even directly message the characters to look for more hints. 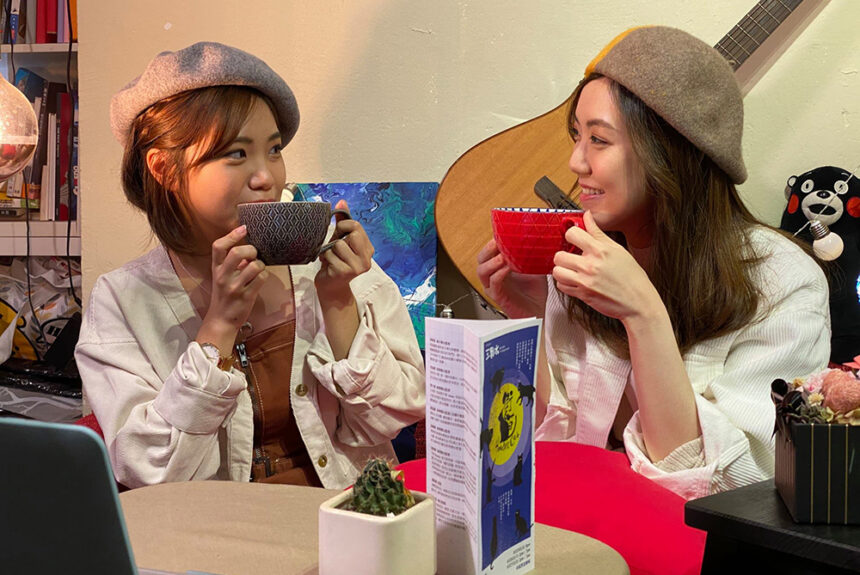 In My Second Life, Windy (left) tried to imitate KOL Joyce and share photos on Facebook. (Photo provided by the interviewee) 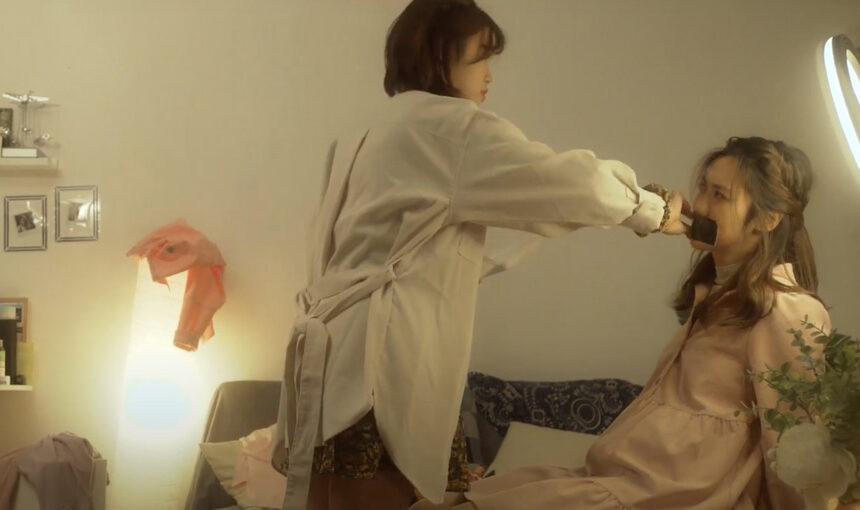 Windy (left) lost herself eventually and locked Joyce up, hoping to replace her. (Screenshot of the project video)

Director Ahching described this form of performance as an “immersive Facebook theatre experience”. Physical performances in the format of immersive theatre, which is similar to murder mystery games, have become popular in Hong Kong in recent years. Unlike conventional theatres where audiences see performances under the stage, audiences of an immersive theatre performance are assigned to different roles who help develop the story and even wear designated costumes.

“The performance can be very entertaining. Even those viewers who seldom go to the theatre are eager to try,” Ahching said.

Ahching had similar production experiences before this project. The creative team partitioned an industrial building unit into many areas among which actors and audiences shuttled and performed.

“An ordinary theatre can hold hundreds to thousands of people, but an immersive theatre requires a lot of space. The venue can usually allow only a few dozen people at a time, hence, the cost is quite high and it is probably impossible to break even,” Ahching said.

However, holding such immersive theatre performance on Facebook has solved the problem mentioned: more audiences could join and more than 80 persons signed up to the group to “watch” the performance this time. 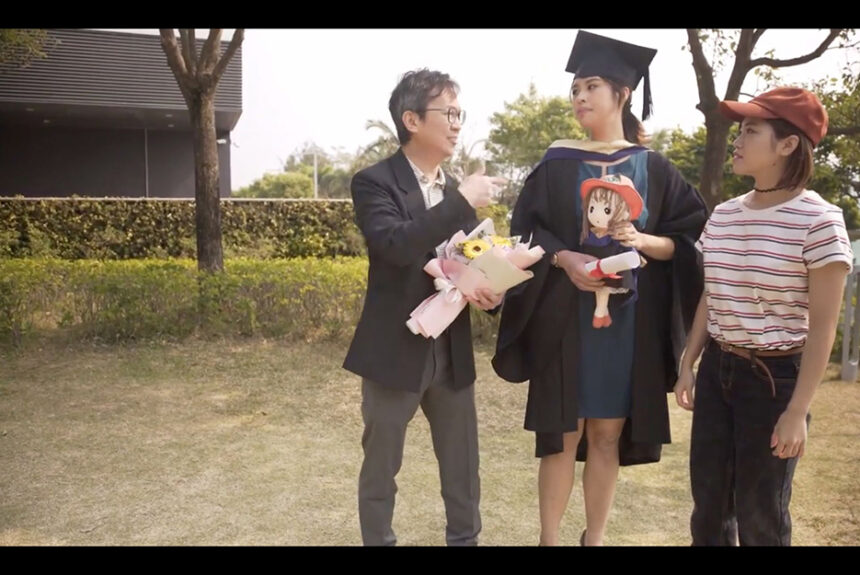 Audience can make friends with different characters and read updates from them on Facebook, studying the background information and relationship among characters. (Photo from the project account in Facebook)

A conventional theatre performance requires a lot of time for rehearsal whereas an online one needs shorter. However, in order to make the characters more stereoscopic, the team put a lot of efforts in preparation, such as taking a large number of daily life photos and short videos, and putting up posts for the social media accounts of the characters..

On the other hand, online performance was a challenge to theatre performers since they were not used to act in front of a camera. “Audiences can see the energy and emotions projected from the whole body of the actors in a stage performance. An online performance differs. It requires different acting techniques. When performing on stage, actors’ emotions have to be enlarged, but it will be too exaggerated before the camera. Hence this is a challenge to the stage performers to refine their acting,” Ahching said. 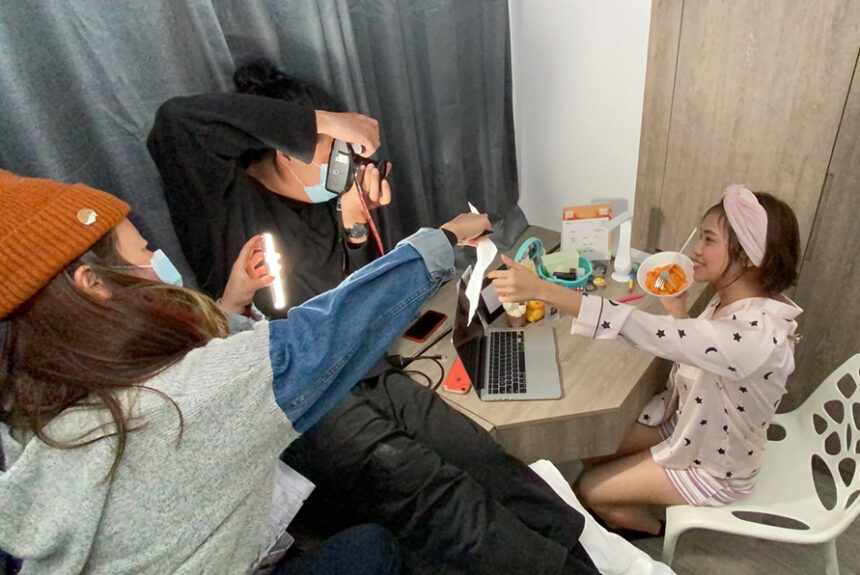 Characters in the video were mostly played by theatre performers. They had to adjust their acting skills to fit the camera. (Photo provided by the interviewee)

Ahching said outright that the subject matter of this performance came from her own experience. About ten years ago, she just graduated from the Hong Kong Academy for Performing Arts and was full of passion. However, after some time she still could not find a job. When her fellow classmates talked about their new jobs on Facebook, she couldn’t help but compare, feeling anxious and so lost that she once deactivated her Facebook account.

She chose Facebook as the “stage” of this performance, as it was closely related to its theme. She hoped the audience would reflect upon their identities on social media, and to be their real selves or imitate others as to be their imaginary selves.

Immersive Facebook performances are new to Hong Kong audiences. Taking this time as an experiment, Ahching said, “I believe this is worth trying, but Hong Kong people are not familiar with it. They are rather passive in something they have not played before. In order to further develop, we have to make the audience gradually adapt to it. Some scripts are suitable to perform online but it takes a longer time for things to happen. If I have more resources, I will make another attempt.” 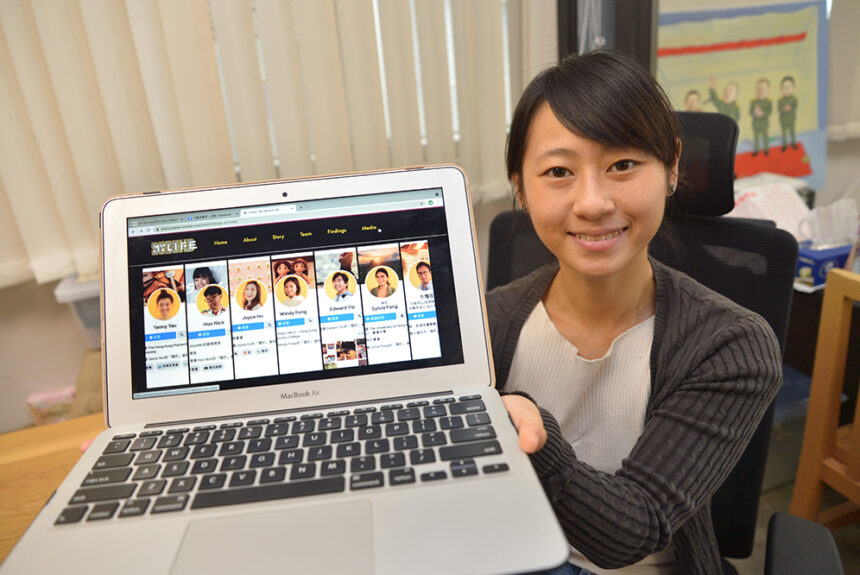 Another online performance funded by Arts Go Digital, My Life after Disaster, was staged in a very different way. Co-produced by Hong Kong and Taiwan theatre practitioners, the surreal drama depicted a world of tomorrow. After surviving a doomsday flood, the heroine found her husband missing. Alone in the ruins, she struggled hard for her life and later came across a survivor from a former enemy country. The two could not tell if they were friends or foes.

My Life after Disaster was staged on a website, consisting of ten short videos in sequence. Each video lasted from a few minutes to about ten minutes, some of which were panoramic videos. Chan Wai-yee, Art Project Manager of My Life after Disaster, said that the biggest challenge in online performances was the sense of presence. Hence, instead of just recording the stage performance and putting it online, the creative team took reference from online performances by the National Theatre in the UK, and theatre troupes in Germany and Taiwan. They thought of ways to resemble a theatre performance through appropriate shooting and editing techniques.

“We had taken into consideration the advice from visual arts designers and network engineers that lengthy online videos were boring and not readable. Yan Pat-to (Co-director and Playwright of this production) also wanted to present the story in a more open way of viewing. Therefore, we deliberately broke down the whole story into different short videos,” Wai-yee said. 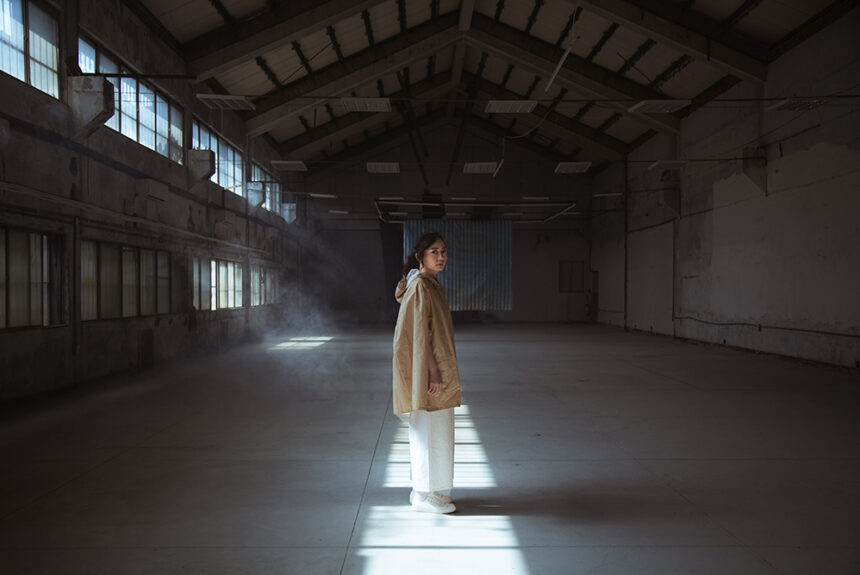 My Life after Disaster tells a story of a female character who survives from the ruins alone after a major hazard. (Photo provided by the interviewee) 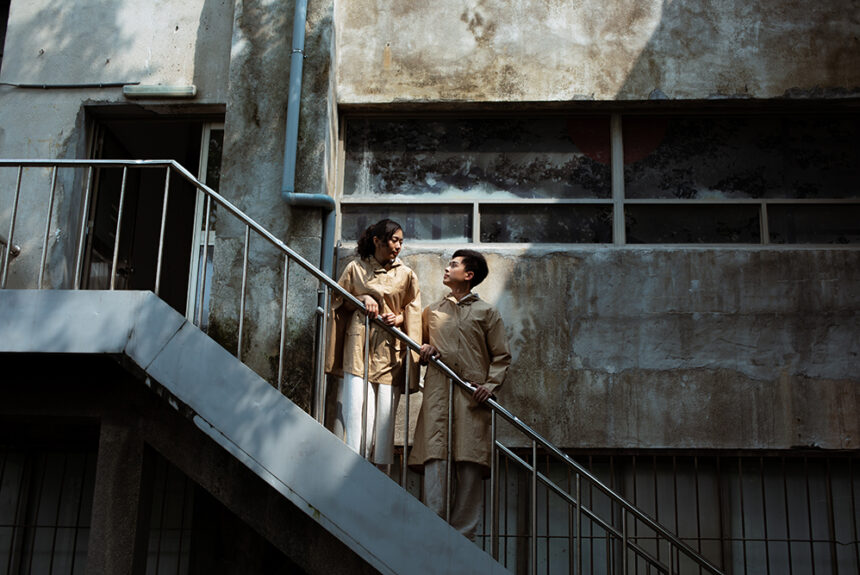 To present the story with a texture of a theatre play, the creative team has taken shooting and video editing references from the online plays presented by foreign theatre groups. (Photo provided by the interviewee)

After the screening, the audience was asked a question: “In the post-disaster world, if only you and two other persons remained, who would you wish them to be?” Some audiences wrote down names of family members and friends, while others picked “simple and pure people” and “people that can live together”.

Few people might think about this question before the year of 2020. Yet in the pandemic when people were in forced quarantine, alone or being confined to a small room with family members, this question was no longer hypothetical. 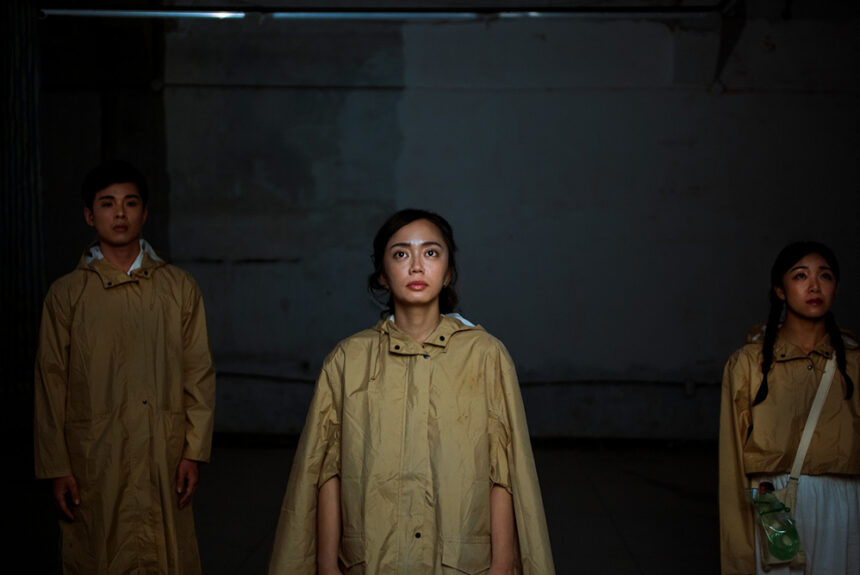 Audience has to answer a question after watching the play: “if only you and two other persons remained in the world, who would you wish them to be?” (Photo provided by the interviewee)

The physical stage performance of My Life after Disaster took place at Taipei City Hakka Cultural Park last year, which focused on the traditional Hakka culture and how people revived after a disaster. The creative team originally planned to adapt and perform in Hong Kong, but as the pandemic struck, it was very difficult to find a performance venue. Wai-yee described the support from Arts Go Digital as “timely rain”, rendering the works to be staged online.

Going More Online for the Future

Wai-yee admitted that they faced many technical problems in the production process. Yan Pat-to used to modify the script according to the performance venue every time. However, due to travel restrictions, he was unable to visit Taiwan to join rehearsals and filming. While actors and the production team were in Taiwan, Wai-yee, who had lived in Taiwan for a long time, had to coordinate the shooting. It took her more than two months just to find a suitable location for shooting the futuristic ruins and she had almost travelled through Taiwan.

She also set up online video conferences for every discussion on scripts, reading, rehearsals and on-site shooting, so that Yat Pat-to could make decisions in real-time even from afar. Eventually, the creative team became accustomed to this cross-regional working mode. 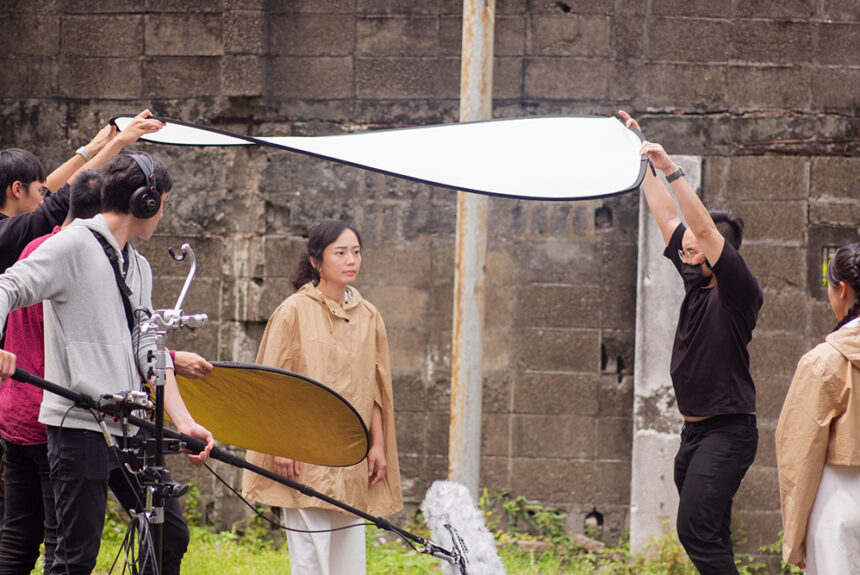 The team set up online video conferences during shooting and rehearsals so that Co-director and Playwright Yan Pat-to could join in real-time. (Photo provided by the interviewee)

Now that Hong Kong theatres have been reopened, Wai-yee was still certain that the online performance of My Life after Disaster had opened up a door for them. “Pat-to queries whether what we have planned now will be stopped in nine months. Then what are we going to do? I think we can help the troupe to prepare for the eventualities,” Wai-yee said. “A troupe may have certain physical performances. For instance, before the pandemic it would stage three plays each with four performances a year. Now it could physically stage one play every year and increase the number of performances, and stage the other one or two online. Online performances would help the troupe operation and at the same time strengthen its interaction with the audience.” 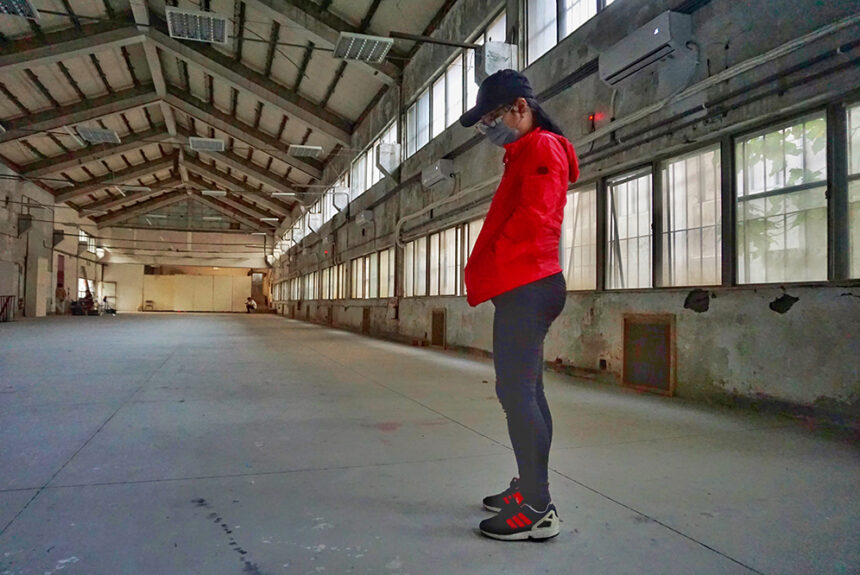