“Art is a channel of communication with people. As the theme and presentation of Winterreise on Ice are so unique, it will be able to speak to the heart”

As one of the many programmes of “Arts Go Digital Platform Scheme”, Winterreise on Ice is one of a kind in terms of its production scale, digital technology and execution. Bel Canto Singers is the backbone of this project, with David Quah as the tenor of Schubert’s song cycle. In addition to singing, the production also includes a rich plethora of stunning visuals in its large-scale digital projection. To top it off, former Olympic figure skater David Liu adds to the flair with his leaps and swirls on ice. In the form of seven short music videos, Winterreise on Ice promises to impress with a combination of classical music, projection mapping and figure skating.

Projection on Ice for the First Time

“Last year, we were stuck at home under the pandemic. I was chatting with video artist Oliver, brainstorming on what we could do. David Quah, our music director, has performed all three Schubert’s song cycles, Winterreise being his favourite. We have always wanted to revisit the song cycle in another light, so I asked Oliver if we could include projection in the performance,“ recalls Fiona, and adds, “We had similar thoughts before. Oliver further proposed that we could try projection mapping on ice. He also suggested inviting David Liu, former Olympic figure skater whom he knew, to join in the collaboration. So it all came together.” David Quah remembers when he was asked if he could skate, he gave a grin, “Sure, I can stand tall on ice!” The idea was sealed and made possible by “Arts Go Digital Platform Scheme”.

Projection on stage in a performance usually involves front or rear projection, that is, images are projected onto a surface and performers will be either in front of or behind the surface. This time, the projectors are installed up on the ceiling, projecting onto the ice surface. The performers need to adjust their movements according to the computer animations. David Quah says, “Since the performance is on ice, the projection area is much larger than before. That’s quite challenging. And it’s not easy to find a shooting venue during the pandemic.”

Winterreise is a song cycle by Schubert set to Wilhelm Müller’s poems. Composed between 1827 and 1828, the scores are an embodiment of grief as Schubert’s health was degenerating. Winterreisse tells the story of a lovelorn man in dreary winter. The song cycle was originally composed for tenor and piano, with a total of 24 songs. To work with the budget, production time and scale of this project, 7 songs were selected to form a mini cycle of music videos for Winterreisse on Ice. Except for the first song which exceeds 6 minutes, the rest of the songs are between 3 to 4 minutes long. 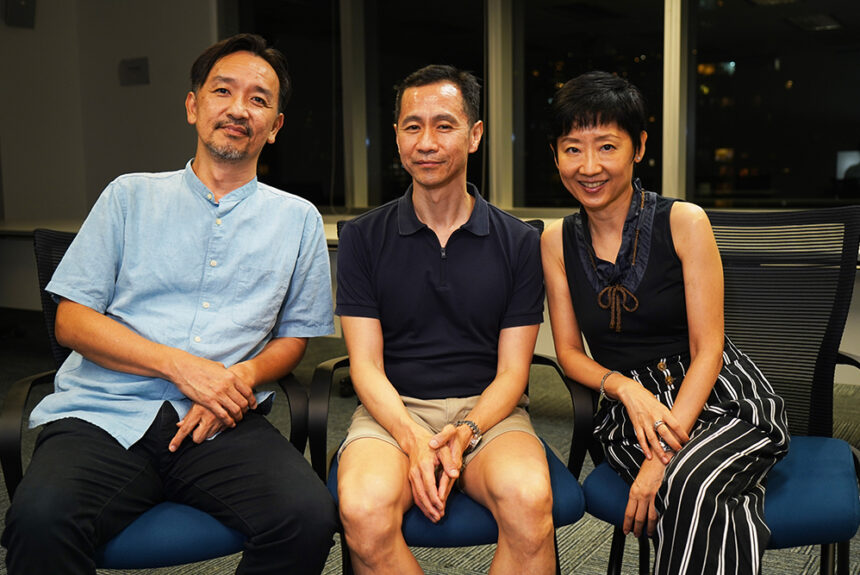 A Journey of Departure

Music director David Quah is a big fan of Schubert, especially of his song cycles. He has sung all three of Schubert’s song cycles, and his favourite is Winterreise, of which he performed the entire cycle in 2016.

“Winterreise portrays the protagonist’s departure from his lover. The 24 songs express his sentiments and depression. Towards the end, he meets a hurdy gurdy man and invites him to accompany him on his songs. Winterreise reflects Schubert’s outlook on life. It’s quite deep and philosophical.” says Quah.

David Quah was born in Penang, Malaysia. He graduated with an Advanced Diploma at The Hong Kong Academy for Performing Arts (HKAPA) and furthered his studies in Australia and London. In 2000, he returned to Hong Kong and started teaching at the HKAPA, while actively performing. Being one of the handful of tenors in Hong Kong, Quah founded Bel Canto Singers.

David Quah agrees that Winterreise is Schubert’s work at his pinnacle, “Since I came to the HKAPA to study classical music, I developed an interest in lieder, especially those of Schubert’s. That’s probably because his melody is catchier. I have sung all three of his song cycles, all of which I feel deeply. For those who are into lieder, this is Schubert’s best work,” says an animated Quah. He adds, “Schubert wrote more than 600 lieder. Say, the fourth song in Swan Song (Schwanengesang) is so popular that it is known by everyone when it is performed. For those who have studied classical music, they would definitely have come across a Schubert song before. For beginners, Schubert songs are also easier as a start.”

David Quah said that Bel Canto Singers has used projection in the video production of the original musical The Happy Prince before. “I believe, however, that Winterreise on Ice is the first to combine projection mapping and figure skating in a Winterreise performance. At least, I have never seen similar performances on streaming platforms.”

The production scale of Winterreise on Ice – transforming the song cycle into music videos complete with figure skating and projection mapping, is much larger than the normal productions of Bel Canto Signers. The challenge lies even bigger under the pandemic. When we visited the team, they were in their third day of shooting. It took place at Cityplaza Ice Palace where they started preparing at 10:30pm for the shooting from 12:30am till dawn. It had been a hectic week for them.

“We are thankful to Swire for supporting our rehearsal and shooting venue, but apart from the ice rink, we still had to practice and rehearse in other places for around 10 times,” says David Quah. Balance is key, “I have a certain understanding on Schubert’s work. Oliver who is responsible for the projection design, shooting and directing, and David Liu, the co-director and choreographer, all have their own creative perspectives. It is all time and effort to compromise, come to an agreement and put the different ideas together.” Comparatively, a singer is more static whereas a skater needs to be constantly on the move. It may seem too still for the latter while the former can feel too overwhelmed. They must work together to strike a balance. 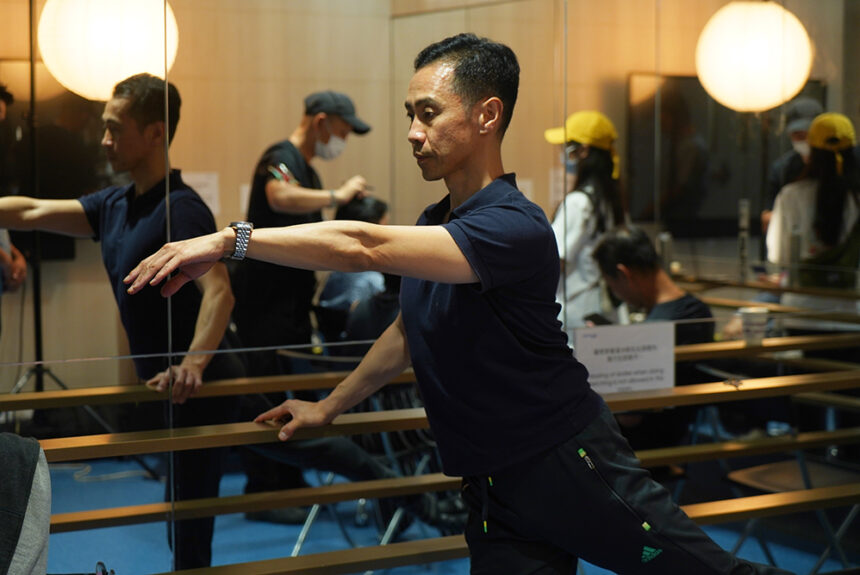 David Liu, stretching and warming up for the shooting at 11pm 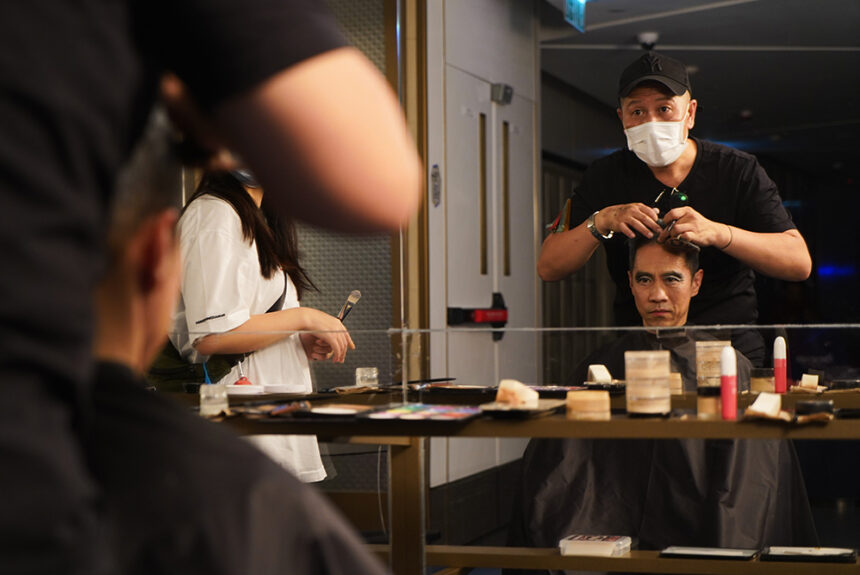 David Liu and his make-up 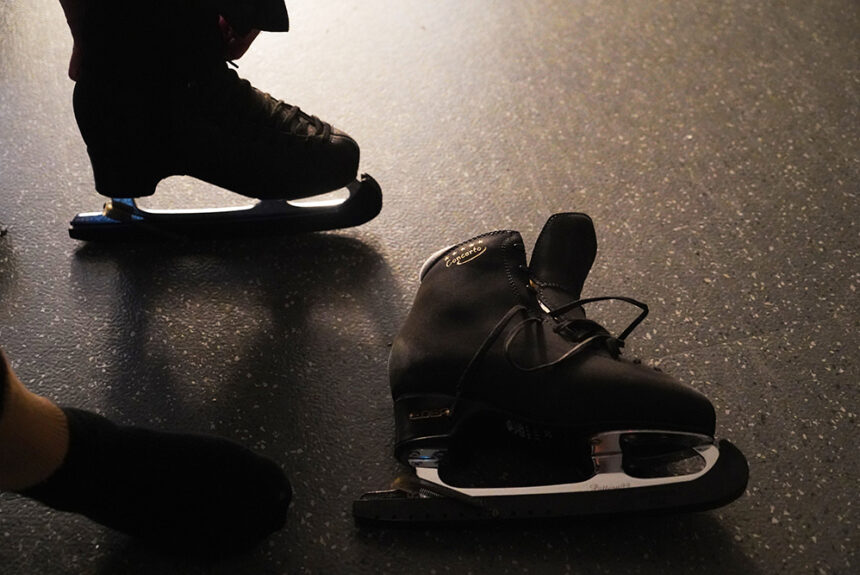 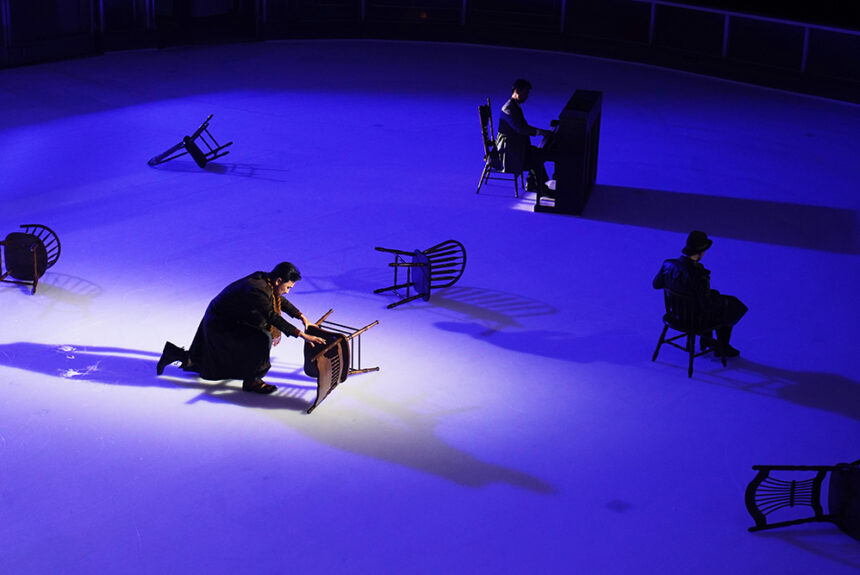 David Liu was born in Taiwan and later moved to the United States at the age of 6. He learned skating since childhood and participated in the 1988, 1992 and 1998 Winter Olympics. He retired as an athlete in 1998 and started working as a skating coach and a choreographer. Though retired, his agility still prevails and he continues to mesmerize with his moves and acts on ice. Liu moved to Hong Kong in 2010 and has been teaching contemporary dance at the HKAPA, while at the same time working as a choreographer and performer. He also returned to school and is now a practicing mental health therapist.

“I met David Quah for the first time when we collaborated in a musical 5 years ago,” Liu responds in English. “So they came to me this time with this interesting proposal. I like classical music. I have watched different versions of Winterreise, but never on ice. In that case, let’s go for it!” He says due to the pandemic, production timeline has been delayed. In preparation for the performance, everyone had multiple roles; each had to deal with issues that they are not familiar with. “For my part, how should I relate to the music? How should I choreograph to it? There were all kinds of thoughts in my mind,” recalls Liu.

David Quah is grateful for this new take on Winterreise on Ice, which was born from the pandemic. As for David Liu who is involved in mental health therapy in recent years, he tends to pay more attention to the mental state of people under the pandemic and their relationship with art. “Obviously, people suffer from the pandemic. In a congested city like Hong Kong, there’re bound to be many people who feel lonely and anxious. I would think that if we can let people feel that they are not alone, we can encourage more discussions and willingness to express themselves, thus generating more mental support.” He says that art is a channel of communication with people. As the theme and presentation of Winterreise on Ice are so unique, it will be able to speak to the heart. “Beautiful music and dance will definitely stretch everyone’s imagination.”

Speaking of imagination, Winterreise on Ice has called for original paintings by secondary students during the preparation period. Based on the seven selected songs, students have responded and came up with their own visualized Winterreise from a different perspective. The paintings are now available in form of a virtual exhibition: https://schubertsongcycles.com/work/