“combined interactive online games and arts to offer new artistic experience. Audience is no longer spectators of conventional arts, but participants in the arts.”

While the pandemic has locked down the world, indoor entertainments such as streaming television and video games have become popular. This phenomenon has changed people’s routines and led to a new wave of artworks. When physical communication is blocked, the arts explores online platforms which may even become a new direction of future development in arts. In this interview series, three art groups from the “Arts Go Digital Platform Scheme” combined interactive online games and arts to offer new artistic experience. Audience is no longer spectators of conventional arts, but participants in the arts.

We may be still haunted by the plight of snapping up masks and toilet paper in the early stages of the coronavirus outbreak, yet forgetting the plight of grassroots schoolchildren during the pandemic.

CHOICE, developed by Electric Diamond Production, is an online interactive role-playing game in which players experience the life of a low-income student under the pandemic: queuing up for masks, classes being suspended and resumed, etc. Players have to make various choices in different situations, such as insufficient protective gears, school closures and anxiety to fight for basic living. The game is virtual but the choices are real. Players must keep enough pocket money, maintain good health and academic performance within a month, otherwise the pufferfish that symbolises stress will “blow up” and the anti-pandemic journey will end untimely. 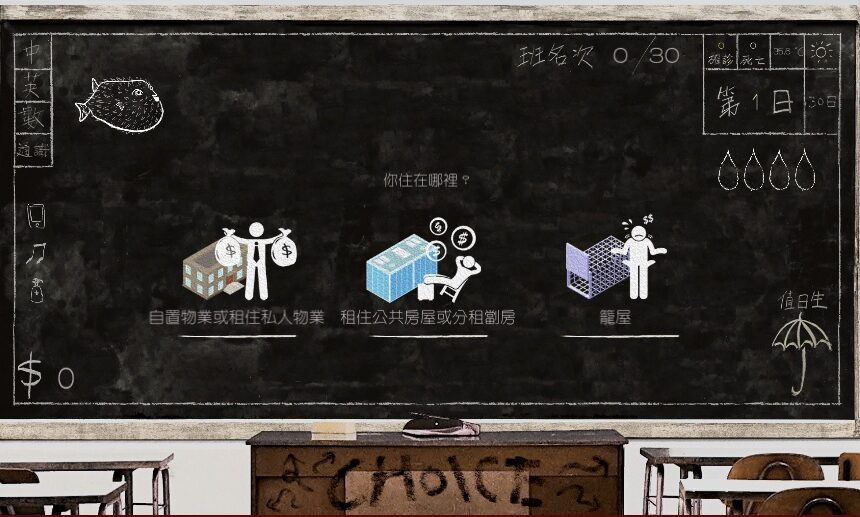 Players can step into the shoes of school children from low-income families to cope with COVID-19 in CHOICE. (Screenshot from the project website)

Into the World of Underprivileged Children

Project leader Leung Kin-pong said that his movie plan was cancelled due to the outbreak of pandemic, so he used the story of the grassroots children originally in the movie as the blueprint of the game in order to record the happenings during the pandemic. “The game will make everyone remember what has happened in the past two years. The game is now available online and will be there for the next 30 years.” Adults living in wealthy conditions could experience the world of grassroots children through the game.

Players’ response in the trial run proved the game a success. Leung Kin-pong said that some players said that they only learned about the plight of grassroots school children from the game. “(They learnt) about the great suffering of these children and would question ‘What has happened in Hong Kong?’ They might read the daily news but that did not impress them. They could only understand when they had experienced personally and made their choices.” The game provided relevant and actual information according to the story plot, such as the statistics on poor population and grassroots school children in Hong Kong. The display of these data made the players feel the immediate concern that they had never felt before.

A Relief for Grassroots Children

Leung Kin-pong hoped the game would achieve more and caress the grassroots children who had been afflicted by the pandemic. The game displayed the actual difficulties encountered by these families. When the children played the game, they knew that someone understood their situation. The game also had added a psychological painting section to help players release their anxiety. 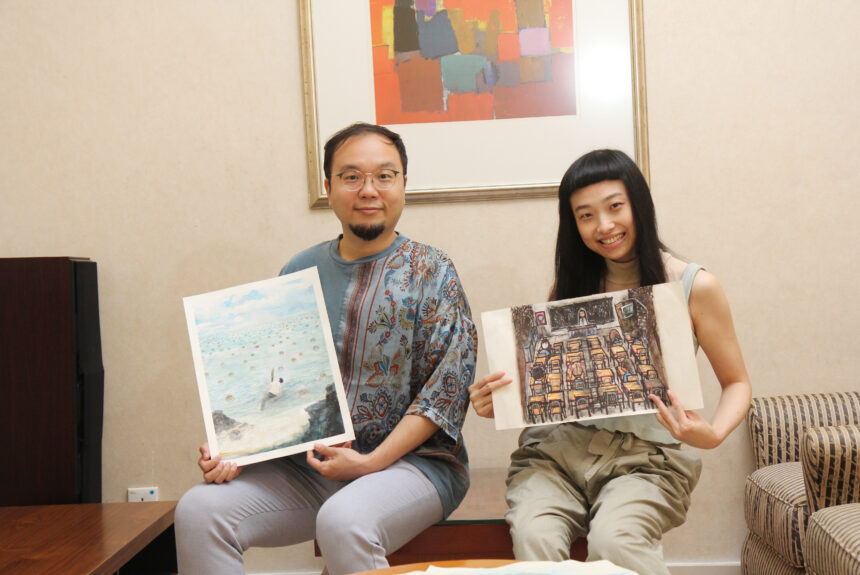 Leung Kin-pong (left) believed that the game can help ease players’ stress, while Wong Wan-sze (right) thought that the game is a reflection of the real-life situation that low-income families are facing. (Photo by Cafe Tong)

The scriptwriter Wong Wan-sze added that players in the trial run reported that it was very difficult to clear all the stages in the game. Whatever they chose, they would probably fail. Yet that was exactly the purpose of the game. “We want to bring out the limitations in the livelihood of the grassroots. No matter what you choose, there are sacrifices. There is no perfect choice.”

Leung Kin-pong supplemented that at present the game was in the form of a webpage and people could play on a computer and a smartphone, but more people could be reached if there were a mobile application version.

Unlike CHOICE which is a real story, the online interactive version of Reincarnation of Zhao Feiyan created by Grand Xiqu is totally imaginative. Unlike the libretto structure, theme and setting of a traditional Cantonese opera, the game enables the player to decide the romance and fate of the heroine Zhao Feiyan: choosing Emperor Cheng of Han or Prince Dingtao, and taking the Pill of Youth or not. The choices open to four different reincarnations of Zhao Feiyan. 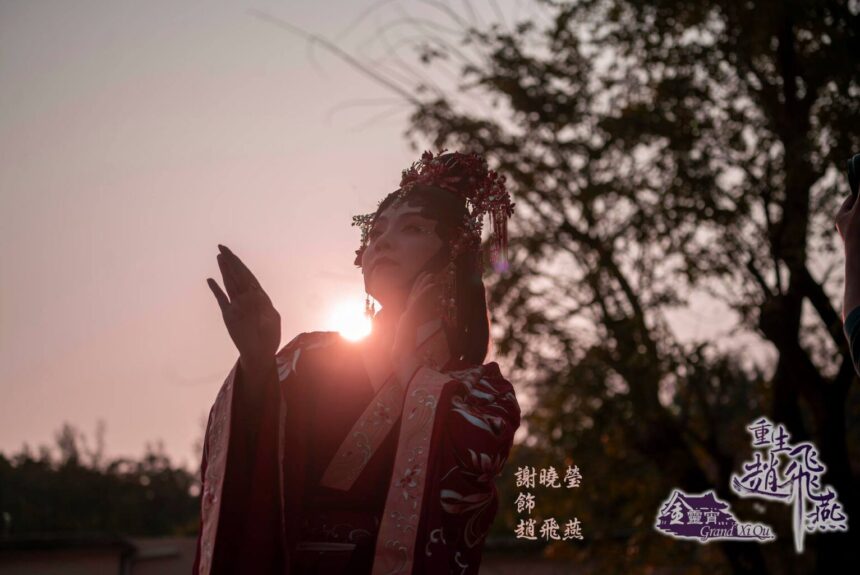 Reincarnation of Zhao Feiyan is a pioneer in Cantonese opera by using an interactive way to tell a story. The project is warmly welcomed by audience. (Screenshot from the project video)

Dianna Tse, founder of Grand Xiqu, is the production supervisor, scriptwriter and main cast of this play. She believed that this online interactive version of Cantonese Opera would attract new audiences. Adapting to the network ecology, the original three-hour Cantonese opera was condensed into short films of about ten minutes each. They performed the fabulous dancing on the palm in order to attract young new audiences. The play also provided Chinese and English subtitles so that overseas audiences could also enjoy.

She admitted that the production was difficult. Even with shooting venue support from The Yuen Yuen Institute, in order to control the production cost, she had to finish all shootings in two days and any problems with the sound and image had to be solved during post-production process. She had written over 20 versions of scripts before she finally decided to use romance as the main storyline. She also had to strike a balance between the story development and performances, so that even though the length of the play was shortened for easy viewing, the audience could still appreciate the essence of each scene.” 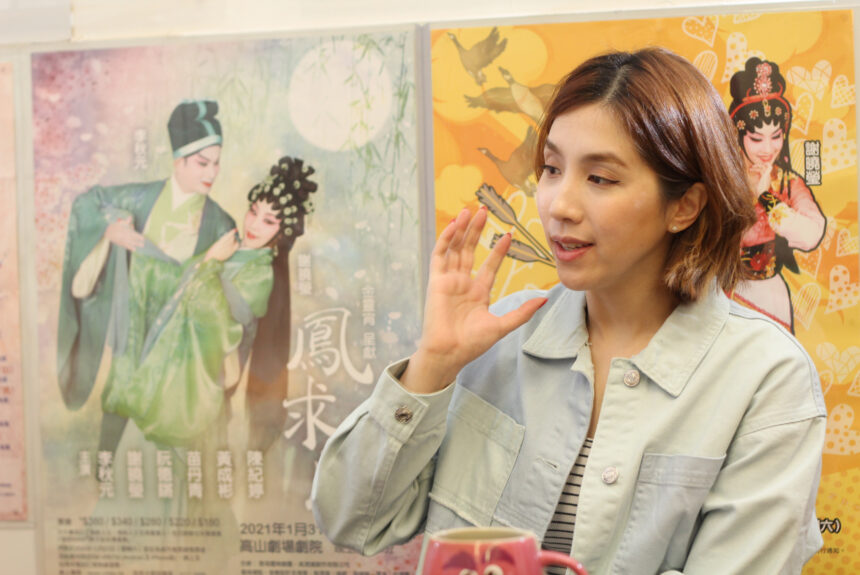 Dianna Tse hoped that adapting Cantonese opera into online version could be further developed, but resource is an issue. (Photo by Cafe Tong)

Online interaction provides an orientation for future development and can most easily reach different audiences. Dianna Tse wanted to keep up the work however resource was a problem. If the audience could pay a certain amount of contribution, it might help make up some costs. Online viewing was a form of enjoyment-cum-education which would draw audiences to the physical performance. However, Cantonese opera being a niche art was unlikely to collect huge rewards as Mainland streamers did, nor make a city-wide hit like a popular music group. In this regard, Dianna Tse hoped that HKADC would provide long term support for Cantonese opera troupes to go online, such as assisting the troupes to hold screenings or seminars to showcase the works, thus providing opportunities for the troupes to reach out and receive feedback from more audiences, especially the young ones. In short, all efforts needed to be made in a long run in order to be effective

The above two projects involve choices and online interactive elements and the stories unfold in a linear manner. R. U. Human? created by Inspire Workshop is about intelligence gathering, and its fragmented narration is more similar to online game experience. Adapted from the science fiction R.U.R. (Rossum’s Universal Robots) and using the Gather.town as the online conferencing platform, the game requires players to manipulate the characters to walk around on the map, piece together the components of the story and watch live-action videos. The story is about the rebellion of robots and the players have to answer different questions and make choices in order to understand their own political orientation. 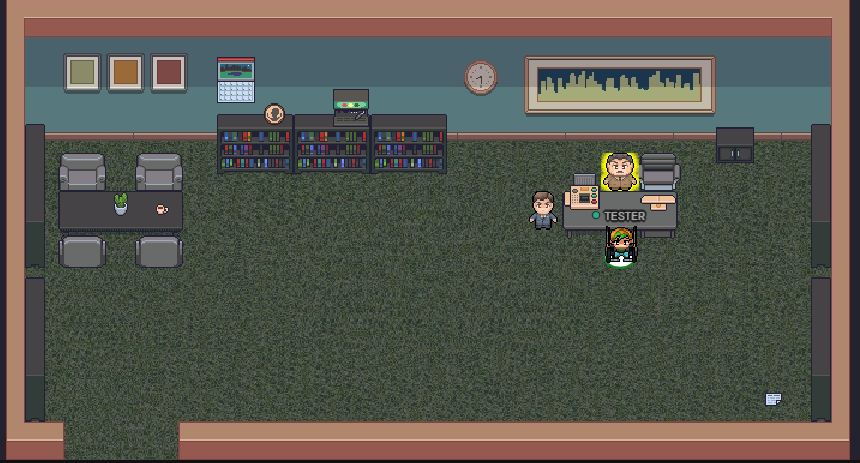 Inspire Workshop used Gather.town platform to present this interactive role-playing game. (Screenshot provided by the interviewee)
It was not the first time Inspire Workshop had made game art. Gather.town was chosen because of its impressive 8-bit graphic style. Sound designer Ah Tat said that Gather.town provided a Gameboy-like visual effect and it is more suitable than a 3D platform for telling the story of robots and the players would immerse to the story easily.

The Audiences Compose the Story

Conventional online art is merely digitisation, such as making a film and uploading it to an online platform. Ah Tat wanted to go further. “Nowadays, information that netizens obtain is mostly fragmented, the sequence of it is jumbled up. Hence the game has to follow the way netizens get information. Compared to traditional theatres, the audiences need more hints to understand the plot. Yet this will not bother the audiences to comprehend the story as video game players are used to digging out hints proactively and piecing story components together.”

While many audiences were also frequent video game players, their reaction to this project was positive. Although the game aimed at displaying a player’s political orientation, Ah Tat pointed out that improvement was needed in several areas. For example, Gather.town allowed a player to communicate with others but this function was not fully utilised in this online game. It was just like a PC game rather than the experience of an open world in the original conception. Another drawback was that at the end of the plot, all the audiences had to vote for a CEO and they should have exchanged views and made discussion. However, because there was no real time instructions, some players did not understand why they should vote and eventually the participation was low. Ah Tat hoped he would pay more attention to cultivate the interaction among players next time he designed a game. 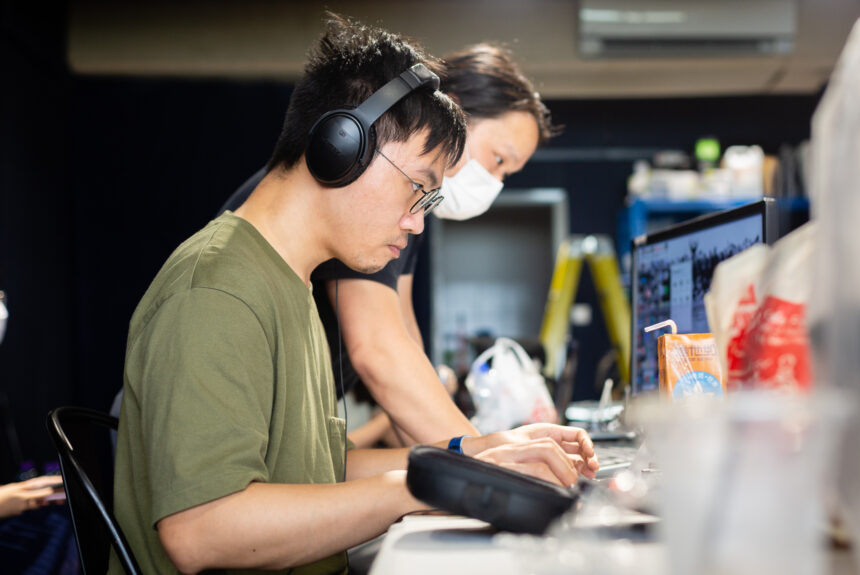 Sound Designer Ah Tat thought that the work could bring audience a new viewing experience, but there was room for improvement. (Photo provided by the interviewee)

On the technical side, one of the major features of the game was that unique sound effects would be generated according to different political orientations. For instance, low frequency sound denoted a shift to the leftist thinking. Ah Tat said that the sound effects needed more exploration and using coordinates to show a player’s political orientation was relatively static. He would like to use more dynamic effects.

When it is exhausted, it mutates; by mutation it opens up. Turning difficulties into drives for creation is exactly what makes arts interesting.